You are here: Home / DIY / How To Easily Upholster A Sofa {and Paint It}
Upholster a sofa…sounds complicated yet in my experience it isn’t that bad! If you search thrift shops and yard sales like I do, you never know when you might come upon something golden. Not golden as in made of gold..but a nugget of inspiration for an entire makeover. Since a sofa is often a cornerstone of a room, I was thrilled to find this French style sofa when out yard-saling one day. It sure didn’t start out looking like this, so let’s see what I did with instructions for you (just in case;-) 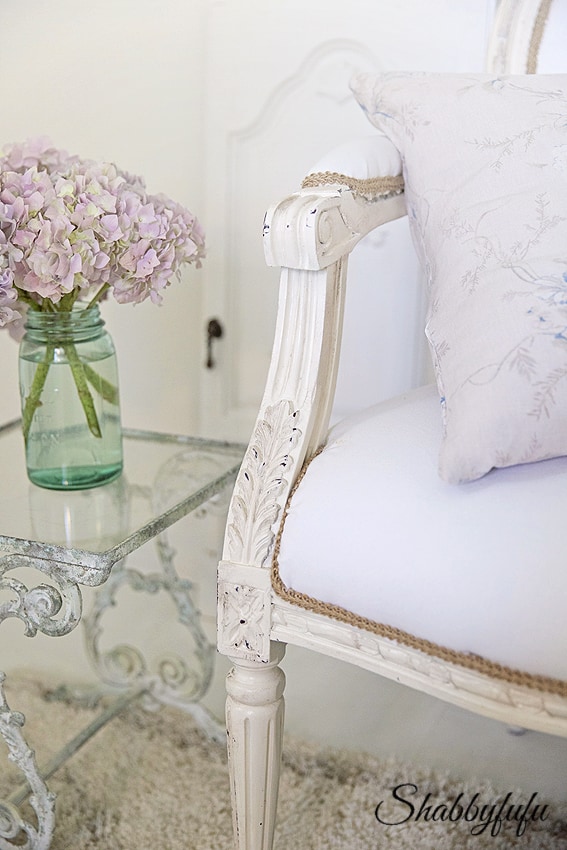 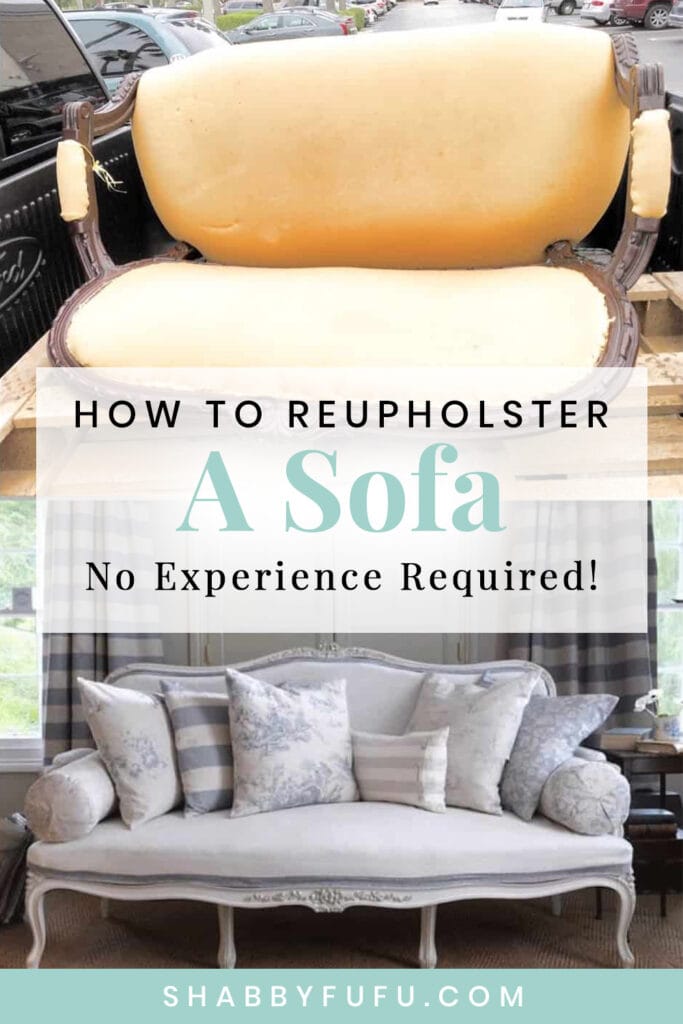 You know that old expression “fake it until you make it”? That is kind of how I feel about giving you a tutorial about upholster a sofa because I am N.O.T. a professional upholsterer.  To be brutally honest it’s not something that I would ever want to be. My husband  jumped in to help me several times with this project, “no wonder the pros charge so much to do this”! I reminded him gently that it’s the same with his construction business. Without him this would have not been completed in just a weekend. It was time consuming, but not especially strenuous. To upholster a sofa in a weekend is possible and doable! 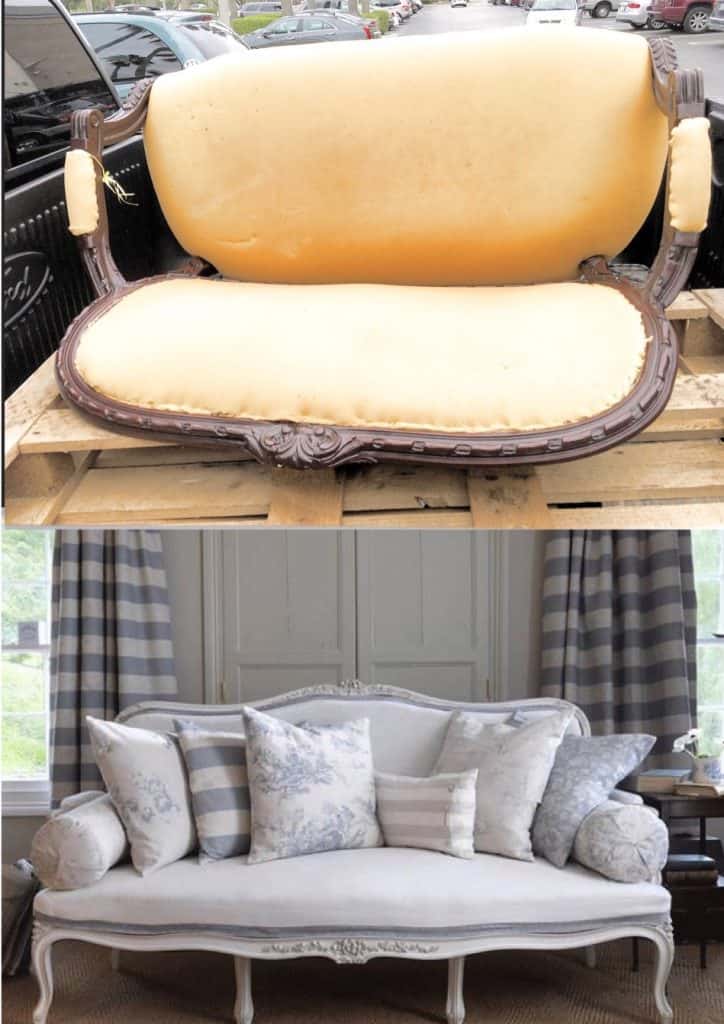 Above was my muse (source, unknown) and below is the finished sofa. It is  a settee that is a smaller size and style than a full size sofa. I found it a couple of weeks ago when on the way to the grocery store at a yard sale and paid $35 for it. I could see from the other side of the road that my husband would have to make a quick u~turn for this one…it had great bones. You have to look past the yuck sometimes…oh, and having a truck is a huge help! 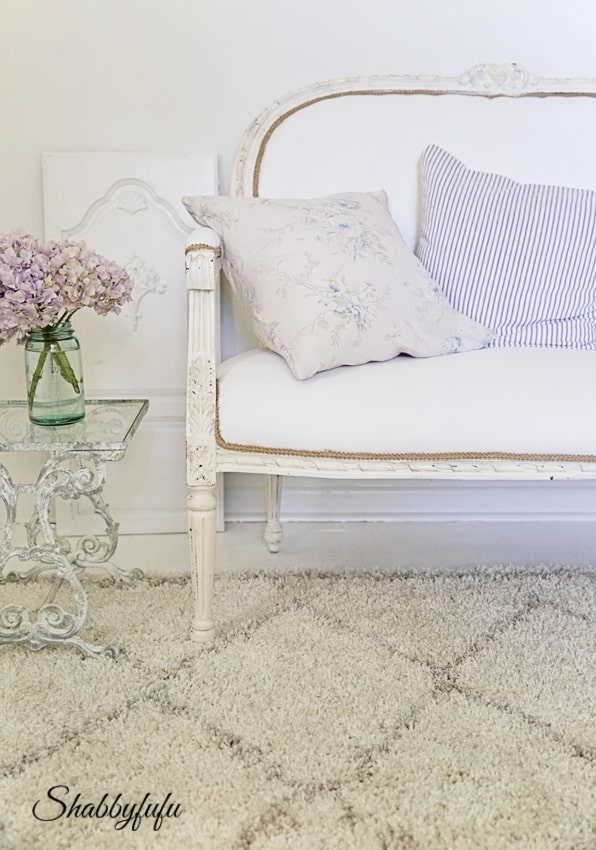 Maybe I’m stating the obvious, but in a project like this you’d want to paint the wood first. I have to be upfront that I am not a huge fan of chalk paint. I know that so many are and I have used it on several projects over the years, but I have been DIY~ing for many years and I just prefer to use regular paint. Chalk paint is pricey and a bit on the thick side for me and I’m not wild about the finish or the fact that you have to wax finish. You have to find what’s right for you and this is what does it for me. 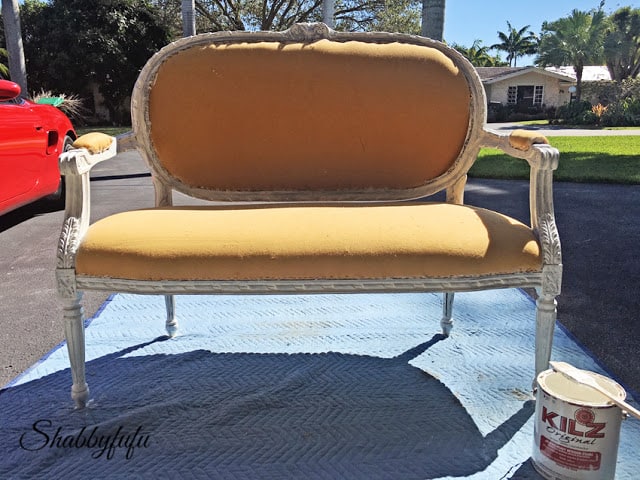 The wood was dark and had what looked like a polyurethane finish from what I could tell. I used my good old standby that I always have on hand in the garage…Kilz oil based paint. It’s not the most environmentally friendly I realize, but I dispose of it correctly and a little goes a long way. Setting up in the driveway on a sunny day kept the smell outside and it dried quickly. I was able to do all of the painting in just a couple of hours!

Next I decided to spray on my favorite spray paint to make life easier. The color that I used is {affiliate} Heirloom White which has an antique look with no further waxing. I did however choose to lightly distress with 150 grit sandpaper in just the places that would normally age. 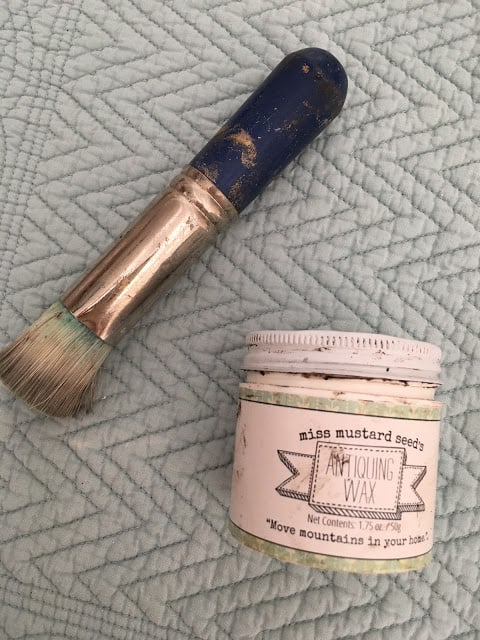 After cleaning with a cotton rag I applied Miss Mustard Seed Antiquing Wax and used an old soft stencil brush that was laying around and then buffed it with an old t~shirt. 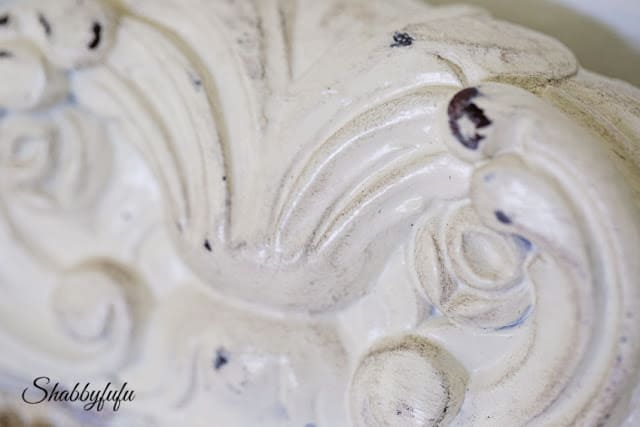 Looks old as dirt and here is a detail shot. 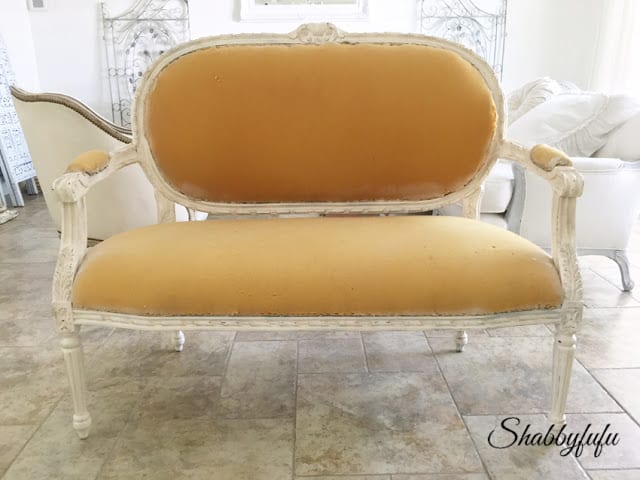 How To Upholster A Sofa

Next it was time to upholster and we brought the frame into the kitchen/dining area to work in the best light of the house.
After checking it over closely and deciding how exactly I was going to tackle the upholstery work, I noticed that it has some remnants of leopard fabric. So not me! 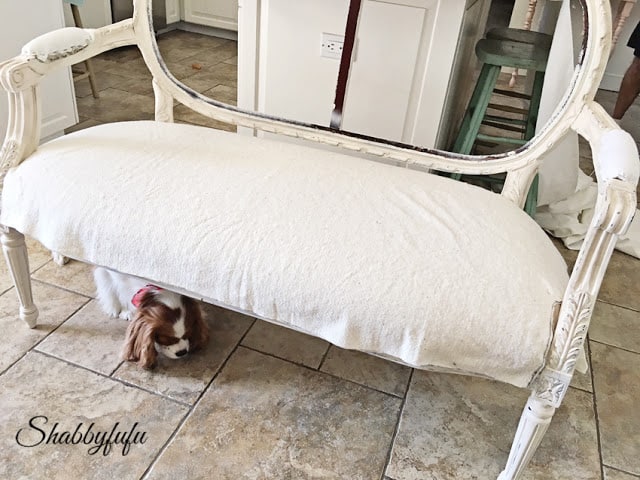 Upholster A Sofa With Denim

I purchased some heavyweight white denim that I’ve used in the past. When I found this piece the fabric had already been stripped, so I made a pattern out of quilt batting and decided that I would use that as a liner to make sure that the yellowed (but still good) foam batting wouldn’t show through. If you are going to tackle a project with white fabric make sure that it’s heavy enough to block what is underneath, or add a liner. 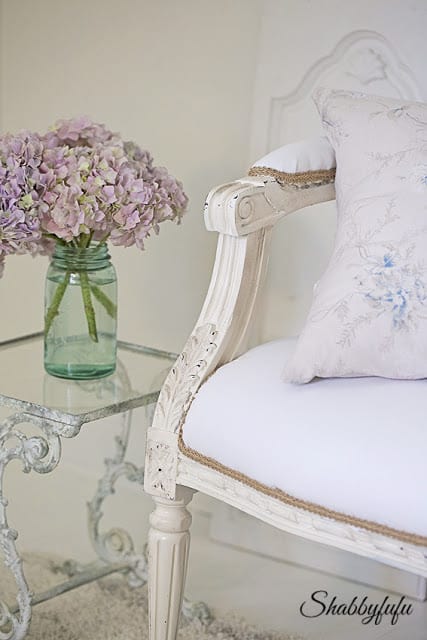 Staples…ugh! I am not sure what the wood used to make this piece was, but it was very hard and I needed to remove all of the staples so that I’d have a new place to staple the fabric into. I had a really hard time getting the screwdriver under the staples and pulling them out with my pliers. That’s when my husband came in to the rescue and he was able to remove them pretty quickly.

After cutting out patterns and trying to figure out how this thing was originally made, we decided to carefully pull off the foam piece from the back to use later, setting it aside. I began by doing the small arm areas so that I could see how the fabric looked. I liked it! Then we worked on the seat portion, lining with the quilt batting and then the white denim fabric on top in a slightly larger piece. Then we stapled, and stapled and stapled some more. The stapler that we used was a HEAVY DUTY ELECTRIC STAPLER and I would not recommend using a typical staple gun for a large project like this. You could also use a pneumatic stapler with an air compressor if you have one…or rent one. 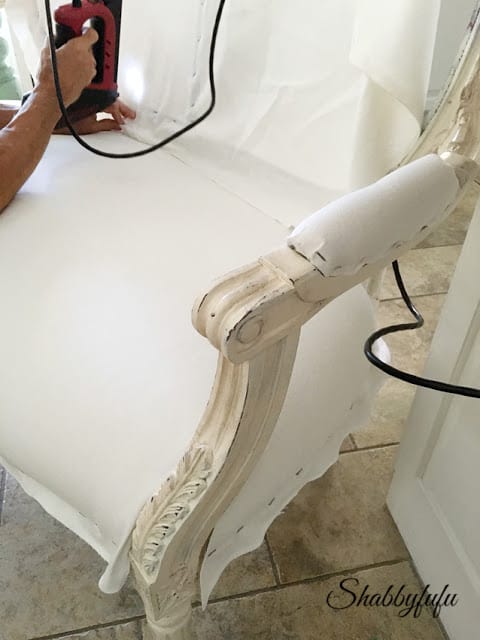 We then stapled the white denim to the back (from the inside) with the wood center brace behind it. Then the foam was put into place again and we covered the front of it with a layer of the batting first and then a piece of the denim that we cut slightly larger. My husband gave this analogy which I think is a good one…it’s like an oreo cookie with fabric on the outsides and the foam inside.
I know from past projects to start in the center and work outwards to make the fabric as even as possible with the least wonkiness of the fabric in the corners. This part of the project was a 2 man job {one woman/and one man:~} so that one could hold and stretch the fabric and the other do the stapling.

After carefully checking our work, pulling a few staples out and redoing where it looked a little lumpy…we were happy! I had some braided burlap trim in my sewing stash and hot glued it over the staples to cover. I thought about using white but I didn’t have any and like the contrast that the burlap gives. 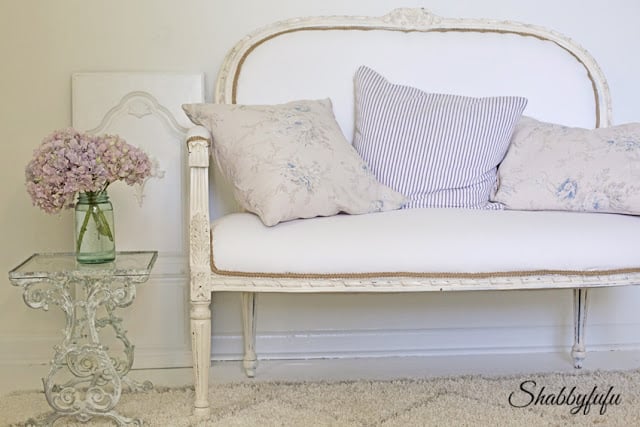 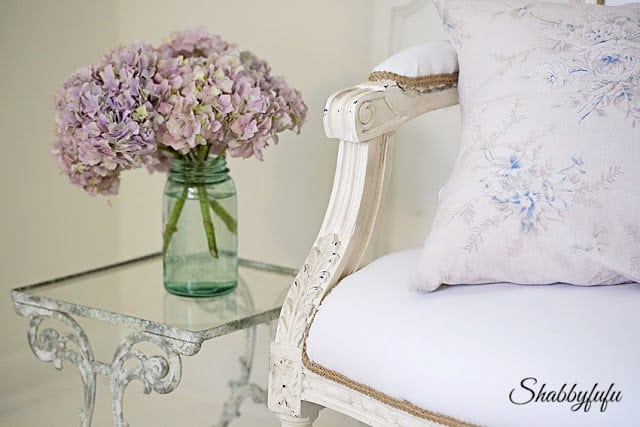 Originally I had thought that I would add upholstery tacks to finish the piece off, but the wood is so hard that it seems not worth killing my hands over. Sometimes I think too that you need to step back from a project and enjoy it before going further, so that’s what I’m doing for now.

It’s obviously much easier to go out and purchase a new reproduction piece, but I love having one of a kind items that we have made in our home or found, or been gifted and it makes it unique! For a tutorial on how to easily make these pillows, you’ll find that HERE.